[By Jacqueline McGlade and Philip Landrigan]

Ocean pollution is widespread, worsening, and poses a clear and present danger to human health and wellbeing. But the extent of this danger has not been widely comprehended – until now. Our recent study provides the first comprehensive assessment of the impacts of ocean pollution on human health.

Ocean pollution is a complex mixture of toxic metals, plastics, manufactured chemicals, petroleum, urban and industrial wastes, pesticides, fertilisers, pharmaceutical chemicals, agricultural runoff, and sewage. More than 80 percent arises from land-based sources and it reaches the oceans through rivers, runoff, deposition from the atmosphere – where airborne pollutants are washed into the ocean by rain and snow – and direct dumping, such as pollution from waste water treatment plants and discarded waste. Ocean pollution is heaviest near the coasts and most highly concentrated along the coastlines of low-income and middle-income countries. 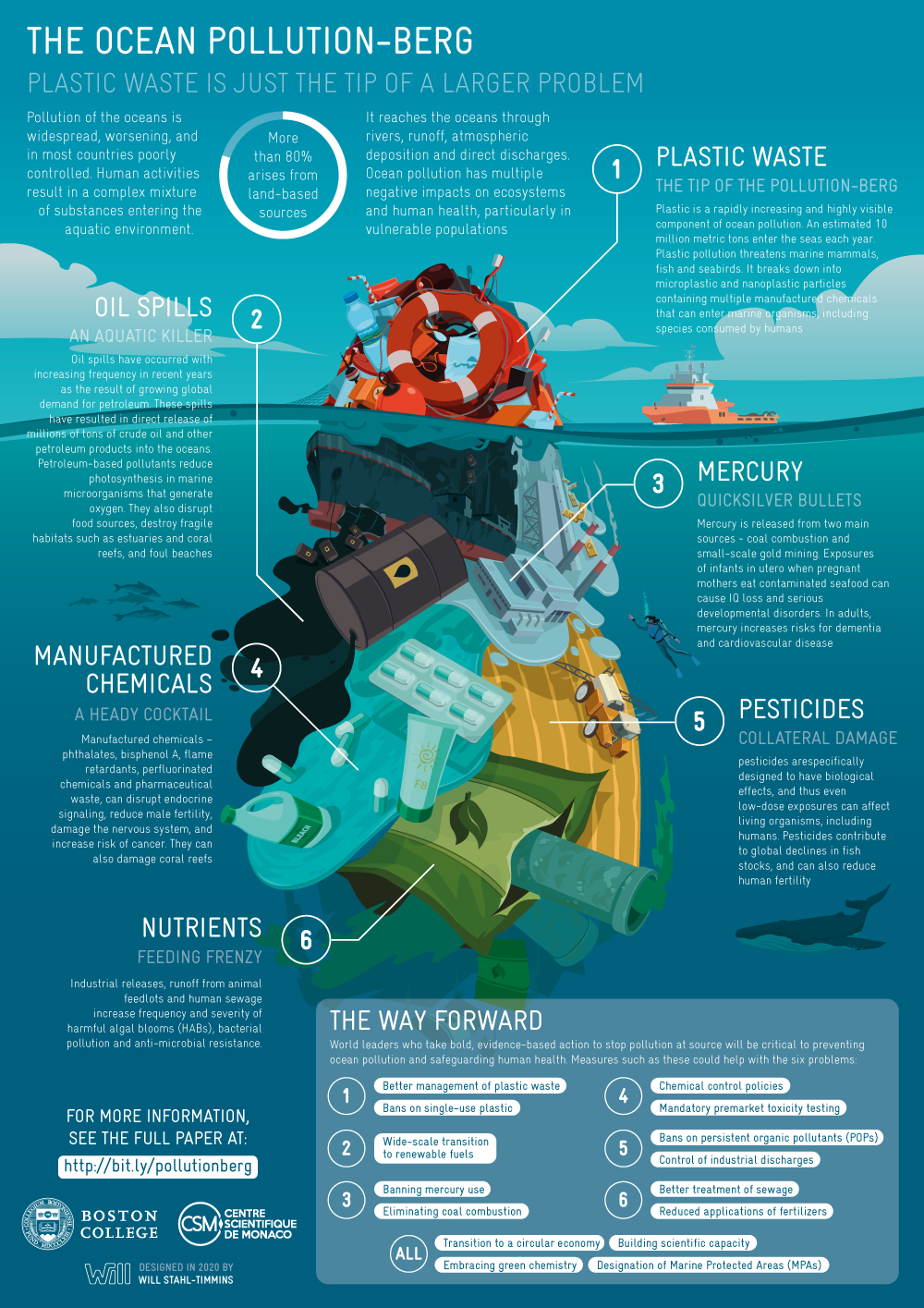 Ocean pollution can also be found far beyond national jurisdictions in the open oceans, the deepest oceanic trenches, and on the shores of remote islands. Ocean pollution knows no borders.

The most hazardous ocean pollution

Plastic waste is the most visible component of ocean pollution. More than ten million tonnes of plastic enter the seas every year. The majority of this breaks down into microplastic particles and accumulates in coastal and deep-sea sediments.

Some large pieces float in the water for decades ending up as massive concentrations where currents converge and circulate. The Pacific Ocean’s so called “garbage patch” is a well-known example.

Microplastics contain multiple toxic chemicals that are added to plastics to make them flexible, colourful, waterproof or flame-resistant. These include carcinogens, neurotoxins, and endocrine disruptors – chemicals that interfere with hormones, and can cause cancer, birth defects, and reduced fertility.

These chemical-laden particles enter the food chain and accumulate in fish and shellfish. When humans eat seafood contaminated with these materials, we ingest millions of microplastic particles and the many chemicals they carry. Though there is still debate on the harm to humans from microplastics, exposure to these chemicals increases the risk of all the diseases that they cause. Virtually all of us have microplastics in our bodies today.

Mercury is widespread in the oceans, and the major culprit is coal burning in homes and industry. All coal contains mercury, and when it burns, mercury vaporises, enters the atmosphere, and eventually washes into the sea. Gold mining is another source, as mercury is used to dissolve gold from the ore.

Mercury can accumulate to high levels in predatory fish such as tuna and swordfish, which are in turn eaten by us. Contaminated fish can be especially dangerous if eaten by expectant mothers. Exposure of mercury to infants in the womb can damage developing brains, reducing IQ and increasing risks for autism, ADHD, and other learning disorders. Adult mercury exposure increases risks for heart disease and dementia.

Petroleum pollutants from oil spills threaten the marine microorganisms that produce much of the Earth’s oxygen by reducing their capacity for photosynthesis. These beneficial microorganisms use solar energy to convert atmospheric CO? into oxygen and are also affected by organic pollutants and other chemicals. When there is a major oil spill, the impact can be huge.

Coastal pollution from industrial waste, agricultural runoff, pesticides, and sewage increases the frequency of harmful algal blooms, known as red tides, brown tides, and green tides. These blooms produce powerful toxins like ciguatera and domoic acid that accumulate in fish and shellfish. When ingested, these toxins can cause dementia, amnesia, paralysis, and even rapid death. When inhaled, they can cause asthma.

Dangerous microorganisms result from a combination of coastal pollution and warming seas, which encourages their spread. Harmful bacteria such as the vibrio species – found in warmer waters and responsible for vibriosis, a potentially fatal illness – are now appearing further north and causing life-threatening infections. There’s a high risk that cholera, caused by vibrio cholerae, could spread to new, previously unaffected areas.

And the health impacts of ocean pollution fall disproportionately on indigenous peoples, coastal communities and vulnerable populations in the Global South, underlining the planetary scale of this environmental injustice.

Political will and scientific evidence

While the findings in this report are alarming, the good news is that ocean pollution, as with all forms of pollution, can be controlled and prevented. Bans on single-use plastics and better waste sorting can curb pollution at its source, especially plastic waste, both on land and at sea.

Wise governments have curbed other forms of pollution by deploying control strategies based on law, policy, technology, and targeted enforcement. The US, for example, has reduced air pollution by 70% since the passage of the Clean Air Act in 1970. They have saved thousands of lives. They have proven highly cost-effective.

Countries around the world are now applying these same tools to control ocean pollution. Boston Harbour in Massachusetts and Victoria Harbour in Hong Kong have been cleaned. Estuaries from Chesapeake Bay in the US to the Seto Inland Sea in Japan have been rejuvenated. Some coral reefs have been restored, such as those in American Samoa, where vigilance, protection and quick response have happened in relation to various pollution threats.

These successes have boosted economies, increased tourism, restored fisheries, and improved health. They demonstrate that broad control of ocean pollution is feasible and their benefits will last for centuries. Our study offers some clear recommendations for preventing and controlling ocean pollution, including transitioning to cleaner energy, developing affordable alternatives to fossil fuel-based plastics, reducing human, agricultural and industrial discharges, and expanding Marine Protected Areas.

Protecting the planet is a global concern and our collective responsibility. Leaders who recognise the gravity of ocean pollution, acknowledge its growing dangers, engage civil society, and take bold, evidence-based action to stop pollution at source will be essential for preventing ocean pollution and safeguarding our own health.

This article appears courtesy of The Conversation and may be found in its original form here.

The opinions expressed herein are the author’s and not necessarily those of The Maritime Executive.

Tue Feb 9 , 2021
ORANGEVALE (CBS13) — An alleged thief had a change of heart and returned a local food bank’s generator after stealing it over the weekend. Last week, the Orangevale Fair Oaks Food Bank was hit by thieves. A security camera captured two men taking off with a generator while workers […]