Preston Nguyen has had quite a year.

The 19-year-old from Arlington graduated from high school, completed his first year of college and was recently crowned World Food Champion, taking home an oversized $100,000 check.

In early May, the World Food Championships were held in South Carolina, bringing the best chefs in the world together for a high-pressure competition. Ten chefs competed at the event dubbed “The Final Table.”

He booked his ticket to the final competition after winning the World Chef Challenge at the World Food Championships main event in Dallas late last year. The young chef won $7,500 and a spot in the finals against seasoned veterans of the kitchen twice his age.

For both competitions, the head chef is allowed two sous chefs to assist during the contest. The choice was easy for him: His mother, Emma, and father, Peter.

“It’s definitely been an unreal year,” Nguyen said. “It’s been an awesome experience, being able to meet so many people and learn so much information so quickly, that I probably wouldn’t have learned until like my third or fourth year of college, or in the workforce.”

The Nguyens are no strangers to the food world.

Emma and Peter Nguyen met in Dallas College’s culinary program about 24 years ago. She would go on earn a degree from The Culinary School of Fort Worth in its pastry program, while he went in another direction to become an attorney.

Preston Nguyen sharpened his knives growing up, cooking for family gatherings and later taking culinary classes in the Arlington school district. He interned at the popular Arlington mainstay, Prince Lebanese Grill, where he fell in love with the restaurant business.

When it was time for college, Preston enrolled at the same place his parents met: Dallas College. And his father joined him, re-enrolling in the culinary program to sharpen his skills.

That’s when the Nguyens first heard about the World Food Championships. They decided to enter last fall to gain experience and network with veteran chefs. Their curiosity paid off, as the trio took first place in the World Chef Challenge, punching their ticket to South Carolina.

“Working as a family and being familiar with how we work really helped, because we know our strengths and we play off of them,” Preston Nguyen said.

The Nguyens had about five months to train and prepare for the final event in Columbia.

To gain better knowledge on certain dishes and techniques, and for an externship in the culinary degree program, father and son started working at Dallas-area restaurants. Preston Nguyen has been at the Rosewood Mansion on Turtle Creek for about four months, while his father worked at the Rapscallion for around three months, resigning before the competition.

Another part of research included reading and watching anything they could about South Carolina cuisine, from cookbooks to cooking shows. Emma Nguyen said it was an eye-opening experience.

“You say Southern cuisine, but each state has their own version of it,” she said. “It all morphs the longer the history goes on, and other cultures influence it.”

The theme for this year’s competition was all about South Carolina, highlighting the Gullah and Low Country cuisine, which includes plenty of seafood and in-season ingredients.

Preston Nguyen said they knew the theme, categories and local ingredients about two months before the competition. They got to work on practicing when they had time, which was a struggle between work and school schedules.

They locked down the recipes about a week before the competition. Each team has to bring its own ingredients, minus any sponsored items, which led to a packed 16-hour drive.

Everything from seasonings to pots and pans made the trip, along with backup items in case something went wrong.

“Granted, this is our first food competition,” Emma Nguyen said, “so we were a little nervous. We’re like, bring every tool, every seasoning, because we don’t want to be caught saying, ‘Oh we forget this.’ We might have over-packed a little.”

The first round was “Peachy Keen Low Country Comfort,” with three ingredients of peaches, biscuits and grits.

Incorporating peaches into every dish, the team made a seared pork chop stuffed with peach and cornbread, Gullah shrimp and grits with a peach potlikker gravy and Old Bay potato crisp, peachy greens with a cold smoked pickled watermelon radish, and a peach and cream dessert biscuit.

Wanting to elevate the dish, the grits were held inside a crispy potato ring instead of dripping over the plate. And rather than making a traditional biscuit, they went the dessert route, Preston said. The dish tied for second place, propelling the trio to next round.

The next two rounds took place on May 1. Round two’s dish was called “Gullah Good Eats,” focusing on seafood that each competitor had to catch themselves with help from an angler.

“This was my first time fishing in like 11 years, because last time I went fishing my brother accidentally hooked me in the neck and I’ve been slightly traumatized from fishing,” he said.

The dish was a pan-sautéed striped bass on a turnip purée with pickled veggies and a pipette filled with hot sauce, a Gullah red rice-topped blue crab and a Carolina chewie with mushroom cream.

They made their own blend of hot sauce and their work paid off, securing a third-place finish out of the five contestants left. Feeling amped from the last hour of cooking, the team had a small break before the final round: “Southern Sunday Social,” with quail as the main ingredient.

The Nguyens could rest again, awaiting the final judges’ scores. After a roller coaster of anticipation, Preston’s name was called. They had won.

“I was definitely breathless, like I couldn’t really talk straight to anybody for a good while,” he said. “It was just one of those, I guess, movie moments where you look up and there’s a bunch of cameras taking photos.”

The sentiment was shared by his dad.

“That’s the biggest reward, is being able to share this moment with my son and my wife, and everybody else that has pitched in as well behind the scenes,” he said. “It’s just one of those things as a parent that you dream of, that you can participate in with your children.”

“To explain motherhood for us, we feel an accomplishment like when we teach our children how to tie their shoes and start riding their bicycles,” she said. “Now it’s like, well, I’ve taught you everything that I know in the kitchen, and to see him soar and even go above and beyond, was really very fulfilling for me as a mother.”

On to the next plate

The rest will go toward the next culinary adventure, he says, whether that be new equipment or saving for a potential catering business.

As for future plans, continuing his college education is at the top, along with working at multiple restaurants. The family plans to enter the next World Food Championships this fall and start this culinary ride again.

Food means a lot to the Nguyens. Preston says that if someone puts enough hard work and dedication into something, they can achieve any goal they’re aiming for. The young chef can’t wait for what the future holds, he’s found his recipe for life.

“It’s one of the reasons why I love this industry so much is being able to make people really happy, because, I mean, everybody loves to eat some way or another,” Preston said. “It’s just one of those things where it’s like you can do artwork, while also serving somebody’s needs.”

Brayden Garcia is a service journalism reporter at the Star-Telegram. He gradated from the University of Texas at Arlington in 2020, where he worked at the student newspaper, The Shorthorn. He previously worked at The Dallas Morning News covering education.

Sun May 15 , 2022
A new ranking from Forbes Travel Guide lists three Jacksonville-area restaurants among the world’s most outstanding establishments. The publication released its 2022 Forbes Travel Guide Star Award Winners this week. RELATED: Five Jacksonville-area hotels recognized as some of the world’s most outstanding The local restaurants that made the list include […] 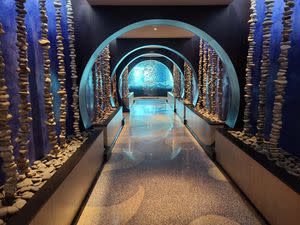