When she went vegan about four years ago, Colleen Corbett, a bartender based in Tampa, Florida, thought she might starve or be forced to eat meat when traveling abroad. Instead, it was just the beginning of her explorations of the burgeoning vegan destinations that have flourished around the world.

“It’s changed how I make my bucket list,” she said between trips to Peru in December and Dublin in March. “It used to be just scenic stuff. Now, I find myself adding cities I wouldn’t have had an interest in before, but have booming vegan scenes. I just added Warsaw.”

While vegans and vegetarians are minorities in the United States, a growing number of people are more interested in reducing their meat consumption, often for environmental reasons, as livestock operations significantly produce climate-disruptive methane gas.

The travel industry is countering with plant-centric hotels, restaurants, festivals and tours as veganism becomes increasingly associated with sustainable travel, and not just during what some people are calling Veganuary, an annual January campaign to highlight the plant-based diet in the month traditionally associated with good intentions.

“Collectively, we’re far more aware of the planetary impacts of food than we were even five years ago,” said Justin Francis, co-founder and CEO of Responsible Travel, a sustainability-focused tour operator, which has seen demand for its vegan trips quadruple in the past decade. “As more people switch to planet-friendly diets, travel is responding to that.”

Still, many are eating greener. In a 2019 Nielsen survey, 62% of Americans said they were willing to reduce meat consumption based on environmental concerns. Many have satisfied their carnivorous cravings with fake meats by brands like Beyond Meat and Impossible Foods. The nonprofit Good Food Institute, which promotes alternative proteins, said 2020 was a record year for investment in alternatives at $3.1 billion, more than three times the $1 billion invested in 2019.

Vegan Bed and Board

Hotels are rolling out the plant-based welcome mat with vegan menus and interior design.

Vegan restaurant additions span the range of lodgings, from Marriott Bonvoy’s Aloft Hotels — which recently added vegan and vegetarian breakfast items in its grab-and-go lobby markets at more than 150 North American hotels — to the high-end Peninsula Hotels, which will launch a new wellness initiative in March, including plant-based dishes as well as sleep-promoting aromatherapy.

Some used the pandemic hiatus of 2020 to turn over a new leaf, so to speak, including Andaz Mayakoba resort on Mexico’s Riviera Maya, which introduced VB, short for vegan bar, serving rice ball salads and Chaya leaf wraps beside the beach.

Since 2017, when it hired vegan chef Leslie Durso, the Four Seasons Resort Punta Mita in Mexico has been accommodating an expanding range of diets. She now offers more than 200 vegan menu items and creates dishes based on guest allergies and dietary restrictions.

“Instead of dealing with this as an afterthought, we are providing a safe place for travelers to relax and unwind that has already anticipated their needs,” she wrote in an email.

Menus aren’t the only vegan aspects of hotels in the animal-free vanguard. Rooms are going vegan with plant-based amenities and interior design.

On Mykonos, in Greece, Koukoumi Hotel opened in 2020 with a vegan restaurant, a spa that uses only plant-based massage oils and rooms furnished with vegan mattresses made with coconut fiber. In the United Arab Emirates, the 394-room Emirates Palace, Abu Dhabi plans to open two vegan rooms in February with vegan minibars and room service.

In London, among its 292 rooms, Hilton London Bankside offers a vegan suite built with plant-based materials, including bamboo flooring and pineapple-based plant-leather cushions. A pillow menu offers down-free stuffing options such as buckwheat and millet and vegan snacks fill the minibar. Guests have designated plant-leather seating in the restaurant.

“People love it because we take it so seriously,” said James Clarke, general manager of the hotel, adding that “it’s not cheap,” running upward of $800 a night.

Many new vegan hotels tend to be high-end, such as the all-inclusive Palmaia — The House of Aia in Playa del Carmen, Mexico, where the food is vegan (although non-vegan additions are available) and the furnishings are leather- and feather-free (doubles start around $900 a night).

Karolin Troubetzkoy, co-owner of the resort, compared having vegan options to maintaining eco-centric operations. “A certain percent of travelers check, and vegan is the same thing,” she said. “A small percent say they come here because you have a vegan restaurant, but that will grow,” she added, noting the resort recently held a vegan wedding for 24 people.

No More French Fries for Dinner

For travelers who don’t want to research each meal, vegan tour operators and travel agents offer the assurance that they will be able to maintain their diets and eat well, particularly abroad.

Last year, Responsible Travel added roughly 1,000 vegan-friendly trips as part of its commitment to becoming “nature positive,” a vow to not harm wildlife or habitats but leave them more protected and supported, by 2030.

Its vegan-only vacations include a 10-day vegan tour of Ethiopia (from roughly $2,300; prices exclude flights), seven days of hiking volcanoes in Guatemala (from about $1,360) and eight days of snowshoeing in Austria (from about $1,160).

“I think this decade we’ll see travel companies not just improve in catering to veganism, but actively working to offer the best food and experiences,” Francis of Responsible Travel said.

Brighde Reed and Sebastien Ranger were disappointed with expensive plates of pasta with tomato sauce and a lack of soy milk on the breakfast buffet at high-end hotels, experiences that helped guide their company World Vegan Travel, which offers trips including gorilla safaris in Rwanda and villa-based tours of Tuscany.

“When 20 people are coming for three nights, hotels are more likely to make an effort than they are for one person,” Reed said.

Leslie Lukas-Recio, a former food importer who lives in Portland, Oregon, was experienced at traveling abroad when she joined a World Vegan trip to Alsace, France, in 2018.

“If you want to experience the culture or focus on the outdoors, the last thing you want to worry about is trying to find something that isn’t French fries and a green salad,” she said.

Donna Zeigfinger, owner of Green Earth Travel and a co-founder of a vegan travel summit running online through Jan. 30, said the diet has become much more mainstream in the more than 30 years she’s been organizing vegan travel.

“There are countries I started going to in the ’80s that I thought wouldn’t do vegan that are now some of the top vegan countries,” she said, citing Spain and France. “The joke used to be, you’d show up at the French border and show your vegan passport and they’d turn you away.”

For her vegan clients, Zeigfinger makes sure hotels know they are vegan and gets them to swap out feather bedding. For Heidi Prescott, a client and frequent cruiser based in North Potomac, Maryland, the notification often triggered a shipboard letter from the culinary staff requesting a meeting.

“I always hated meeting with the chef,” Prescott said. “I would eat around it.”

Now, there is much more vegan variety at sea — Regent Seven Seas Cruises offers more than 200 plant-based dishes and Virgin Voyages has a plant-focused restaurant aboard its ship, Scarlet Lady — and the letters have stopped. Last fall, Prescott sailed with Oceania Cruises around the Baltic Sea, her 11th cruise with the line, which carries staples like cashew cheese and identifies vegan choices on pasta and grain-bowl bars.

Paul Tully, a vegan and the CEO of Better Safaris, organizes vegan-friendly sustainable trips to Africa, where he said it’s relatively easy to eat vegan.

“Surprisingly, it’s been the airlines which appear to be slow on this uptick in veganism, many still offering extremely bland food and limited options for vegans,” he wrote in an email.

Destinations, by contrast, are keen to trumpet their vegan credibility. The tourism office in Virginia said visitors spend an average of more than five minutes on pages related to vegetarian and vegan content at its Virginia.org website, almost two minutes more than for general travel content.

Through Jan. 30, the global fair Expo 2020 Dubai is holding what it calls the Middle East’s first vegan food festival. In September, the tour operator Vegan Travel Asia by VegVoyages is planning what it calls the first vegan festival in the Himalayan region, taking place in Nepal and Bhutan with panel discussions, cooking workshops and a Vegan Village of more than 100 exhibitors.

But veganism is becoming easier to find in more rural areas — Argyll, in western Scotland, has a new vegan trail connecting vegan cafes and inns — and in smaller cities like Boise, Idaho, home to a vegan food truck, soul food restaurant, tattoo shop and dining tour.

“To be honest, it’s more interesting than a non-vegan tour,” said Ross Belfer, a partner in the company, who is an American living in Israel. “What Israelis can do with a vegetable is rather unparalleled, in my humble opinion.”

This article originally appeared in The New York Times.

Get news delivered to your inbox each morning.

How much protein does shrimp contain?

Wed Jan 26 , 2022
A shrimp is a small marine crustacean that is a popular type of shellfish to eat. Shrimp is a generally healthy food due to being high in several vitamins and minerals and a rich source of protein. Shrimp is a nutritious type of seafood that people can easily incorporate into […] 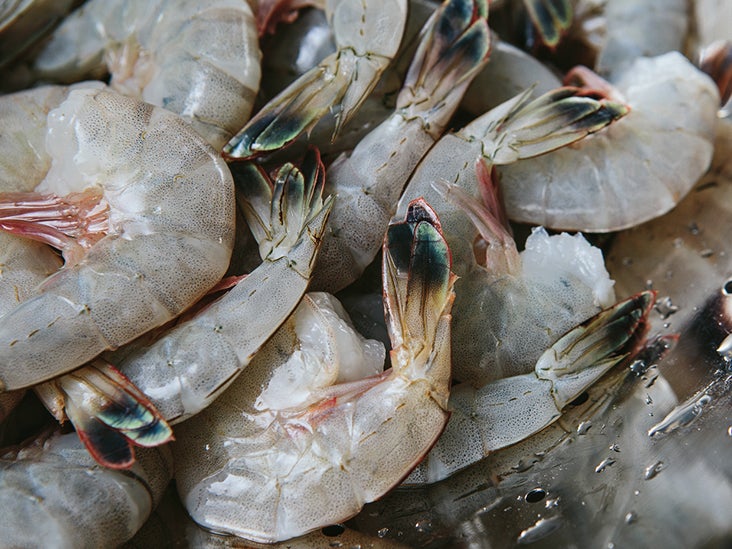