There’s a lot to do at the Maricopa County Fair.

Put on by the Maricopa County Fair Association Inc., the fair is returning April 6-10 after being canceled in 2020 and 2021 due to the pandemic.

The event started in the 1950s as a fair and citrus festival. Executive Director Karen Searle has been managing the fair since 2004. She had owned a racing pig company, traveled around with her husband performing as a professional clown and did management services for fairs before this.

She says the fair is community-driven and offers something for all ages, whether they are participants or spectators.

“I love producing an event that brings in the community together to celebrate not just Maricopa County but agriculture, the arts and the talent that we have in our community,” Searle says.

There are several ways to get into the Maricopa County Fair for free. Check the website for other discounts.

What to expect at the 2022 Maricopa County Fair

Participants are judged on their animals’ adherence to market standards as well as their skills in showing, caring for and interacting with their animals.

“They look forward to showing their animals to the general public and talking about them,” Searle says.

Inside the Arizona AG and Ewe exhibit, attendees can learn about Arizona’s agriculture and interact with baby animals.

The SRP Safety Zone will educate on topics such as water safety and careful street crossing, and a safety magic show will engage kids on safety topics in a playful way.

Community members participate in the fair in a variety of ways, including performing with school choirs, bands, clogging groups and dance or theater troupes.

What to eat, buy at the Maricopa County Fair

Many visitors come to the fair for the shopping and varied food concoctions.

Other makers and vendors will sell apparel, lotions and soaps, handmade jewelry and artwork.

Local and national acts will perform on multiple stages. Other performers will roam the fairgrounds to entertain the crowds. Here are several to look for:

Among the biggest draws every year are the monster truck shows and Demo Cross, a combination demolition derby and figure-8 race. Both take place throughout the weekend.

The Superhero Stunt Team is a BMX show based in Phoenix that has been doing the county fair for six or seven years.

The company is owned by Eric Horrell, who started it in 1993 in Chicago and brought it to Arizona after he moved to the Valley over 15 years ago. He used to ride in the show and now shares emcee duties.

The riders range in age from 18 to their 30s and have been riding BMX bikes anywhere from 3 to15 years. Many have day jobs and do stunt riding in their spare time. He says they all share a deep passion for the sport.

“If you do it, you love it. If you don’t love it, you don’t last in it. I’ve stuck with it for years. I must be guilty of loving it too,” Horrell says.

When Horrell started, backflips were the hardest trick. Now, riders take their hands or feet off the bike or spin their handlebars or bikes around while doing backflips. They also incorporate front or double flips into their performances.

“Over the years, the riding has evolved. The bicycles have evolved, and also our ramps have evolved. When I first started, the first ramp I built was only 4 foot tall. The one that we have now is almost 7 foot tall,” Horrell says.

Thrilling juggling by Roberto the Magnificent

Roberto the Magnificent will bring a circus variety show with juggling, unicycle and pogo-stick riding, magic illusions and vaudeville-style comedy.

The performer, also known as Robert Stuverud, is from Seattle. He has done fairs in Yuma, Casa Grande and Pinal County, along with the Arizona State Fair. This is his first time performing at Maricopa County Fair.

He has also done NBA halftime shows across the country and has opened for “Weird Al” Yankovic, Reba McEntire and the Temptations.

Stuverud started performing at age 11 as part of a duo called the Gentlemen Jugglers. His friend started juggling first and taught him after school. Early on in their careers, the duo won silver medals at the World Juggling Championships.

One of Stuverud’s signature routines involves bouncing on a pogo stick while wearing a helmet covered in nails and having audiences throw fruit at him, which he spikes with his helmet.

He also does fire juggling on a unicycle and bounces coconuts off his head while juggling them.

Stuverud says his favorite part of being an entertainer is connecting with others.

“The greatest thing about performing is when you can make somebody laugh who hasn’t laughed in a long time,” Stuverud says. “I’ve received letters from kids saying, ‘Watching your show, I wanted to learn to juggle. When I learned to juggle, it kept me out of trouble, and I made it through school. And now I’m graduating from college.’

“There’s times when you really connect with somebody and really inspire them.”

Admission: $9, free for age 8 and younger. Unlimited-ride wristbands are $30 in advance, $35 onsite. Parking is $11. Cash and cards accepted throughout the fair.

Fri Apr 8 , 2022
New NOMZ owner Roy Wright, from left, with co-owners Jamie Krum and Bill Simoes, who will both be working in the kitchen, and former owners Sam and Kass LaVictoire. The LaVictoires will soon embark on some world travel. NOMZ eatery founders Kass and Sam LaVictoire have hung up their Akron […] 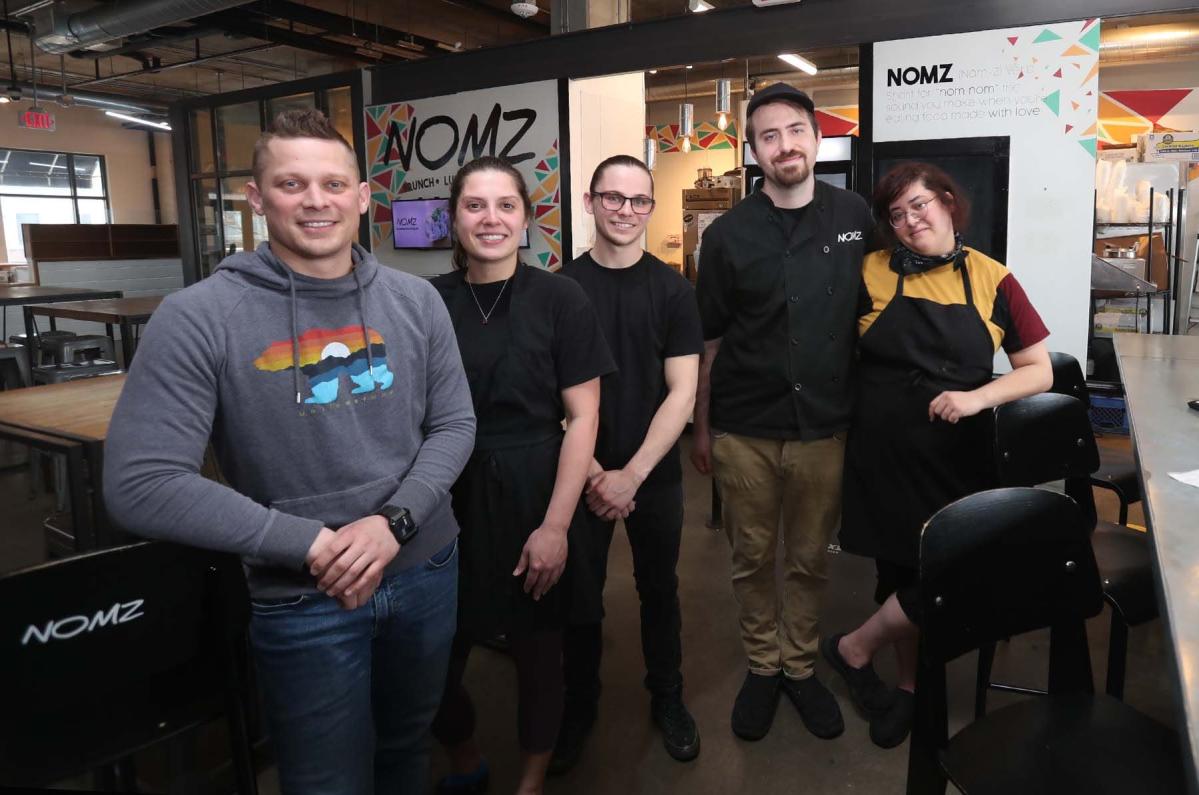