A food fan has revealed they ended up becoming a “forced vegetarian” after a tick bite left them allergic to red meat.

Jules, who calls themselves Jules.Amanita online, shared an eye-opening video on TikTok after revealing they developed an unusual allergy last year.

Jules, thought to be 25, lives in central Virginia and is passionate about mushrooms, often foraging for the tasty fungi in the woods.

But their diet underwent a shift last year after they were bitten by a bug, later identified as as a lone star tick.

They revealed it caused them to develop alpha-gal syndrome—which means they’re now allergic to red meat.

Sharing more about their story, they said: “Hi my name is Jules and I’m allergic to meat. Last summer I got bit by a lone star tick, which gave me Alpha Gal syndrome. The bite transmitted the sugar called galactosidase alpha 13 galactosidase which is naturally present in most mammals but not humans.

“So now, when I eat red meat my body responds with hives, vomiting, severe stomach pain and my throat closing up. So fun.”

The clip, which was captioned “ask me anything about Alpha Gal Syndrome,” has attracted a lot of attention online since being uploaded on Tuesday, amassing hundreds of thousands of views.

Jules, who usually shares their fungi passion on social media, revealed more about how it’s affected their life.

While some people are extremely sensitive to any red-meat animal product, Jules confirmed their allergy was limited to just the meat, adding that fish is ok.

“My friend has it so bad that she can’t even consume heavy cream,” they said.

“Some people are so sensitive they can’t do dairy, but I can,” Jules wrote in comments, adding: “But I ate something with gelatin without realizing and got sick.”

The incident caused hives and nausea—but no vomiting—after Jules ate the animal by-product.

Responding to numerous queries about the condition, Jules later confirmed they couldn’t pin point the exact date they got bitten but had a rough idea, saying: “I had my first reaction (and ate my first meat since the bite) about three weeks later.”

Despite giving up red meat, Jules added they have: “No other health issues, just a constant fear of being accidentally closed.”

And although Jules confirmed the allergy is most likely “forever,” they added: “It’s often permanent, but it depends on the person. I know a couple people who have had the syndrome for 5+ years. It depends on the severity. Lyme disease is way worse. I feel lucky that this is the tick borne illness I got.”

Commenting on the video, Easternspadefootoad admitted: “This is my biggest fear.”

While Ellahallmark wrote: “I have this too! Growing up in the woods will do that to you.”

Lex added: “I have a new fear. I am now terrified to go outside.”

The Mayo Clinic went into further detail, confirming there’s no treatment other than avoiding red meat and animal products.

The website said: “Alpha-gal syndrome is a recently identified type of food allergy to red meat and other products made from mammals. In the United States, the condition most often begins when a Lone Star tick bites someone. The bite transmits a sugar molecule called alpha-gal into the person’s body.

“In some people, this triggers an immune system reaction that later produces mild to severe allergic reactions to red meat, such as beef, pork or lamb, or other mammal products.”

Fri Jun 18 , 2021
It is our purpose to offer the finest, most healthful Chinese language eating experience in Richmond and we uarantee it! When you’ve been making an attempt to eat wholesome for a long time, you know the way quickly you get sick of chicken breasts and broccoli. Break out of your […] 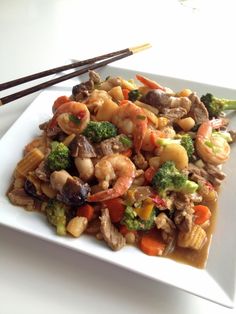