In just 15 months, the company has grown from a food truck at a brewery in San Antonio to 13 restaurants in San Antonio, Austin, Houston and Dallas. CEO and founder Lucas Bradbury plans to double that number by the end of 2022. Six to eight of them will be in Dallas-Fort Worth, he says.

The founder aims to replace consumers’ fast-food cravings with an equally fast spot. But they don’t call it fast food.

“We call it convenient consumption,” Bradbury says. “Fast food has a bad stigma because it’s also labeled as unhealthy — bad for the environment, bad for you. … We’re trying to be fast casual with real, curated menu items that are made from scratch that you can get through a drive-through.”

And, oh yeah, it’s vegan. That’s notable to Bradbury, who has been a plant-based eater since 2015, but he says it’s never the first thing he mentions when he explains his brand.

He hopes some customers might not even care that the chicken nuggets aren’t made with chicken, the burgers aren’t made with beef, and the macaroni and cheese doesn’t have cheese in it. The “chickn” is a plant-based product from the Netherlands, from a company named Tindle. Burgers start with an Impossible Burger base, but chefs at the restaurant add 17 ingredients in-house. The mac has a cashew-based cheese substitute.

Bradbury says he changed his diet seven years ago for health reasons. He dropped 130 pounds by cutting out meat and other animal products, he says. By eating fake-meat substitutes instead of salad and raw veggies, he says it felt less like a diet. And mid-pandemic, he realized that he could snap up failed fast-food real estate — Whataburgers, Jack in the Boxes and the like — and replace them with a vegan alternative.

“If we’re really going to make a difference, we’ve got to slide in and offer what every person is eating in the U.S.,” he says. “You look at Chick-fil-A as a No. 1 performer. We’ve got a concept that hits every single thing they serve, plus more.”

The restaurant on Greenville Avenue in East Dallas already had a drive-through and a patio. It was built to be Start, a healthy fast-food place that closed during the pandemic. It was then a short-lived seafood spot called Caribbean’s Shark.

Bradbury thinks his food can compete with big-name fast-food brands. Prices would have to stay low. His Cheez Burger costs $7. Its ingredients are similar to a vegan version of a Big Mac at McDonald’s, which usually costs about $4. Project Pollo’s Chikn Nuggets cost $5.50 for eight; he hopes they can compete with Chick-fil-A’s, which cost about $3.

“Our pricing needs to be pretty comparable to that of a Chick-fil-A, or something of the sort, to break down the barrier, so there’s not a stigma over it being super expensive. We don’t want someone to say, ‘I’d like to try this but I can’t afford it,’” he says.

He’s also passionate about using compostable items and about giving employees medical, dental vision and sick leave. And he says a company survey shows 79% of customers are not vegan or vegetarian.

“You can’t look at this concept as a targeted vegan concept. It’s not,” he says.

Vegan kreplach and the secret to tender, delicious hamantaschen

Mon Mar 7 , 2022
As a trained chef and registered dietitian, Micah Siva has already helped thousands of people eat more healthfully through her vegan-centric food blog, Nosh with Micah, nutrition workshops and recipe development for businesses both big (Nestle) and small (Oaktown Spice Shop). But there is one mission in particular on the […] 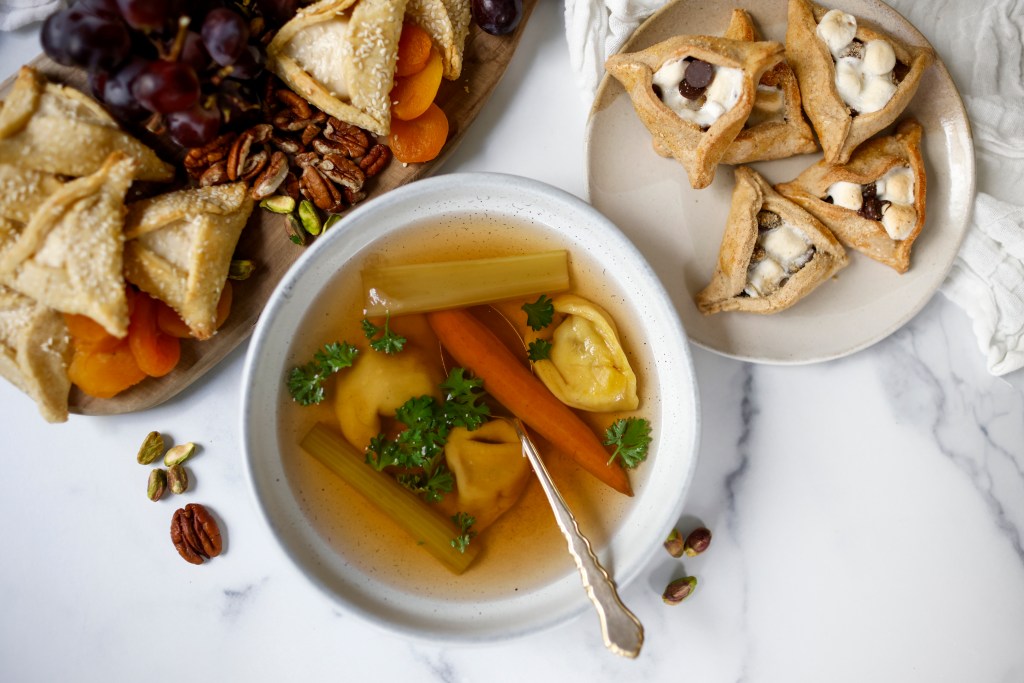