You can Grow Your Own Way. All spring and summer, we’re playing in the vegetable garden; join us for step-by-step guides, highly recommended tools, backyard tours, juicy-ripe recipes, and then some. Let’s get our hands dirty.

The first thing you need to know about Dan Barber is, personality-wise, he’s the kid who is worrying aloud about being his class valedictorian even when everyone knows he has it in the bag. The chef behind Blue Hill and Blue Hill at Stone Barns spends just as much time thinking about seeds as he does about what dishes to serve at his highly regarded restaurants.

It might sound like a nerdy, abstract preoccupation for a chef. But when you go back far enough, almost anything you eat comes from a seed—or eats things that do. Since 2010, Barber, who is a notable advocate of the farm-to-table movement, and Michael Mazourek, a researcher at Cornell University’s School of Integrative Plant Science, have been talking about how to make vegetables taste better, and that all starts with seeds.

We ask ourselves ‘can you stick it in the oven, take it out, not do anything to do it, and does it taste great?’

During an impulse meeting in the kitchen at Blue Hill, Mazourek shared prototypes of some miniature squashes that he had bred to taste more flavorful so that you could enjoy them raw or cooked with very few added ingredients (think: maple syrup, brown sugar, or dried spices); Barber was hooked on the idea that vegetables could be more delicious, whether raw or roasted. Together, the two were inspired to launch Row 7 Seed Company and eventually brought the 898 squash—an intensely sweet squash that tastes like caramel when roasted—to the marketplace.

Their goal is to serve as the middle men between college- and university-affiliated seed researchers and the public, introducing the latter group to well-bred seeds that will grow into better-tasting vegetables. That includes specimens like Mazourek’s 898 squash—a younger sibling of the crowd-favorite the Honeynut—but also beets, tomatoes, potatoes, and so much more. “We ask ourselves ‘can you stick it in the oven, take it out, not do anything to do it, and does it taste great?’ Home cooks during the week don’t want to follow recipes; they want to take something out of the oven and have dinner. And they want to eat more vegetables. This is an opportunity to do that,” Barber told me.

Take beets, for example. Admit it—no one really likes beets. If you do, count yourself a rarity. “The market for people who like beets is infinitesimal,” Barber said. And no one knows that better than Irwin Goldman. Goldman is a Wisconsin-based beet breeder and father of two daughters, both of whom hated beets. In an attempt to create a beet that his daughters would love, he manipulated the seeds to remove a cluster of compounds that are what make beets taste earthy and instead, highlight the fruitiness of the beets. The result was the Badger Flame Beet. “It was a big discovery and incredibly delicious,” said Barber.

Another candidate ripe for change? Oats. No one is tripping over themselves to wait in line for hours for the launch of a new kind of oats. Soon, that could change. “I was in North Dakota with an oat breeder and he passed an oat across the table, like nothing special at all. I took a bite of it raw and there was something so delicious about it; it was sweet and fatty and unlike anything that I thought an oat could be,” said Barber.

As for the Badger Flame Beet, what once went from a seed that only a small group of professors were excited by has now grown to a culinary phenomenon among chefs and breeding companies alike

He learned from the breeder that, for decades, oats were bred against fat to comply with rules set by the American Heart Association, which said that oats could not contain more than six percent fat. However, recent research has shown that the fats in oats can help lower cholesterol and more of it is not actually a bad thing. Now, breeders like the one Barber met with in North Dakota are breeding oats to contain 11 to 12 percent fat so that they taste better and are better for you. “I now can’t eat an oat from the supermarket. Once you taste these oats from the supermarket, you’ll never want to go back,” he said.

I was jealous that I too couldn’t eat better-tasting oats for breakfast, but Barber assured me that, like other prototypes-turned-consumer-ready seeds, these oats will be available soon enough. As for the Badger Flame Beet, what once went from a seed that only a small group of professors were excited by has now grown to a culinary phenomenon among chefs and breeding companies alike. “What I’ve come to appreciate is that what we are talking about is not the interest of a group of professors and seed breeders. It’s also not hippie-radical farm-to-table people either, or white table restaurants. It’s also of interest to large-scale breeding companies,” adds Barber. And now the public—aka chefs and home cooks—can now get their hands on these seeds.

In February 2020, a group of chefs came together to create an Austin, Texas-based “Seed to Pop-Up” series, in which they each incorporated the Badger Flame Beet into food, beverages, and desserts. These kinds of real, culinary applications are exciting for the breeders because they’re witnessing the fruits of their labor transform into, for example, ravioli filled with beet greens and ricotta, and topped roasted beets, or a goat cheese mousse garnished with Badger Flame Beet ganache. “You don’t need to do a lot of backflips because the flavor is so remarkable and so distinct. Any ingredient that makes the chef look like a better chef tends to do pretty well,” he said, laughing.

There are currently 15 seeds available for anyone to purchase, though the seeds do tend to sell out quickly: Sweet Prince Tomato, a sweet and vibrant tomato that’s delicious raw; the creamy, nutty, and buttery Upstate Abundance Potato; Lodi Squash, which has a deep flavor and velvety texture; Fast Lady Northern Southern Pea, noted for their “memorably creamy texture and delicate flavor”; Midnight Roma Tomato, a deep-purple tomato that boasts a quick cook time and memorable flavor; Habanada Pepper, which has “all the floral sweetness of the famous habanero, minus the burn”; the juicy and crisp Patchwork Pepper, which has notes of green apple, citrus, and caramel; the infamous Badger Flame Beet; the bright purple Beauregarde Snow Pea; Sweet Wave Snow Pea Blend, which combines the Beauregarde snow pea with its “wavy-podded plus one”; 7082 Cucumber and Tetra Squash; there’s also Robin’s Koginut Squash, a cross between two types of squash; and the sweet, but meaty Centercut Squash.

“What everyone is recognizing, or has recognized for a long time, no matter how big a company you are or how mega your breeding horizons are, there’s a sense of appreciation as we move into a world that’s more unforgiving and more complex from an environmental perspective. There’s a recognition that seed breeding for local ecologies is incredibly important and is the only way to move forward for a healthy food supply,” says Barber. The better the seeds are, the more delicious your food will taste. While interest is growing, the project is still admittedly quite niche. The typical American grocery store will still stock gourds like acorn and butternut squashes come the fall, while home cooks will have to search more deliberately for new additions like the 898 squash. If most people don’t consume beets on a regular basis, what’s it going to taste to convince them that the Badger Flame is actually good? And how are you going to get it in their hands when regular beets aren’t given a ton of shelf space as it is? That’s up to Barber.

Are you seed curious? Have you, or would you, try growing any of Row 7 Seed Company’s seeds? Let us know your thoughts on this movement in the comments below.

Fri Apr 29 , 2022
Anna Maria Ruminska lives in southwest Poland and runs, with other volunteers, the Slow Food Dolny Slask Convivium, born to promote the gastronomical biodiversity of the whole region. During the pandemic emergency she never stopped organizing events and activities for citizens, members and not members of the Convivium, trying to help […] 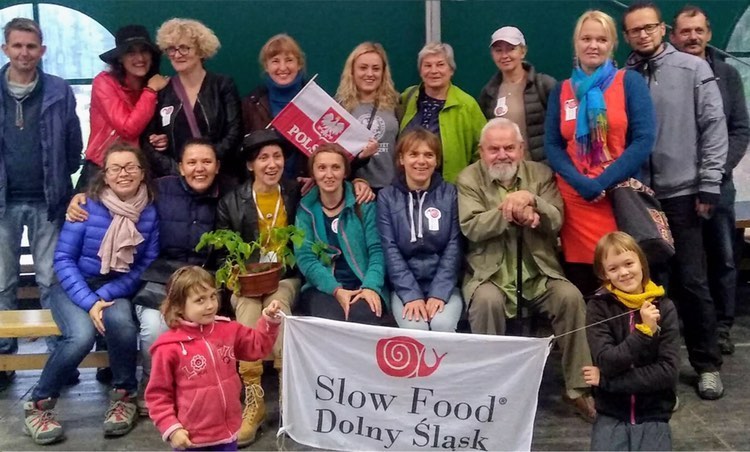