Marquez has been calling suppliers all over Texas, asking about any new shipments. “Right now they are out of it, completely,” she said. “I’m desperate.”

Marquez lives outside San Antonio, a city that has seen the nation’s highest rate of formula shortages — 56% of normal supplies were out of stock as of Tuesday, according to retail software company Datasembly — amid a nationwide supply crunch that has left parents scrambling to feed their children.

The shortage has been a challenge for families across the country, but it is especially palpable at grocery stores and food banks in San Antonio, a Latino-majority city in South Texas where many mothers lack health insurance and work at low-wage jobs that give them little opportunity to breastfeed. Across the city, baby food aisles are nearly empty, and nonprofit agencies are working overtime to get their hands on new supplies.

The shortage became acute with a recall of a defective brand this year after at least four babies were hospitalized with bacterial infection and at least two babies died. But the recall has been exacerbated by relentless supply-chain woes and labour shortages. The Datasembly research found that the national out-of-stock rate for baby formula reached 43% for the week ending Sunday, up 10% from last month’s average.

Republicans have seized on the widening anxiety among parents to blame President Joe Biden, arguing that the administration has not done enough to ramp up production. On Tuesday, Sen Mitt Romney of Utah sent a letter to the Food and Drug Administration and the Department of Agriculture, asserting that federal officials have been too slow to respond.

The FDA, which is leading the federal response, said officials were working with Abbott Nutrition, the company involved in the recall, to restart production at its plant in Sturgis, Michigan. The agency said it had been meeting regularly with various infant formula manufacturers to increase production capacity and urging retailers to consider placing sales limits on infant formula products.

“We recognize that many consumers have been unable to access infant formula and critical medical foods they are accustomed to using and are frustrated by their inability to do so,” the FDA commissioner, Dr Robert M Califf, said in a statement Tuesday. “We are doing everything in our power to ensure there is adequate product available where and when they need it.”

Across the country, many mothers say they are rationing food for their babies as they search for more formula. Some are driving several hours, only to find more empty shelves.

Online, private sellers are gouging prices, marketing cans for double or triple their normal price, and many large retailers are sold out altogether.

Since the shutdown of Abbott Nutrition’s Sturgis facility, other manufacturers have struggled to quickly increase production because their operations are geared toward a steady level of consumer demand, according to Rudi Leuschner, an associate professor of supply-chain management at Rutgers Business School.

“Some industries are very good at ramping up and ramping down,” Leuschner said. “You flip a switch, and they can produce 10 times as much. Baby formula is not that type of a product.”

On top of the broader supply-chain issues that have emerged during the coronavirus pandemic, such as labour shortages and difficulty securing raw materials, the problem may be compounded by panic-buying, Leuschner said.

Abbott Nutrition said it was doing everything it could, including increasing production at its other US plants and shipping products from its facility in Ireland.

Yet for parents who are having to give their babies less than the food they need, even a temporary shortage has been terrifying. Some parents are researching homemade infant formula recipes on the internet, although health experts have warned that such formulas can lack vital nutrients or present other dangers.

“We also recommend not watering down the formula because it can lead to poor nutritional balance and create serious problems,” said Kelly Bocanegra, program manager for the federal Women, Infants and Children program in the San Antonio metro area.

At Children’s Hospital of San Antonio, doctors are encouraging new mothers to increase the amount of milk they pump and breastfeed as much as possible.

Some are unable to breastfeed, however, because of inadequate supplies or other health issues, and health care workers said that many mothers working in fast food, retail or other low-wage jobs may be unable to afford the time to breastfeed.

Parents like Marquez whose children require special diets also do not have that option. In some cases, those parents already were struggling to afford baby formula cans that can cost more than $100 each, said Elyse Bernal, president of Any Baby Can, a nonprofit that offers access to care for children with special needs.

“It’s very scary, especially for the families that have to have a particular blend formula, because now they’re worried about how can they feed their baby?” said Megan Sparks, one of the group’s case managers.

For Darice Browning, the specialty formula shortage in Oceanside, California, has been so acute that she has considered going to the emergency room just to feed her youngest daughter, Octavia, who is 10 months old and has rare genetic conditions that make it impossible for her to eat solid foods. The food allergies she shares with her 21-month-old sister, Tokyo, cause both babies to vomit blood if they ingest dairy proteins.

At one point, Browning said, she called all of her daughters’ doctors looking for formula, only to be told that none had any.

“I was freaking out, crying on the floor, and my husband, Lane, came home from work and he’s like, ‘What’s wrong?’ and I’m like, ‘Dude, I can’t feed our kids; I don’t know what to do,’ ” Browning said.

As of Tuesday, she had four cans of formula left for Octavia — all of them on the recall list — and was trying to stretch out her supply with smaller rations.

In Pell City, Alabama, Carrie Fleming has been putting half a scoop less of formula into every bottle she makes for her 3-month-old daughter, Lennix.

Fleming had originally tried to breastfeed Lennix but could not produce enough milk. Then Lennix had severe allergic reactions to nine different dairy-based formulas: She broke out in rashes, cried constantly and threw up everything she ate. The only formula Lennix can stomach is a hypoallergenic kind called PurAmino, which Fleming cannot find anywhere nearby.

She has called stores and pharmacies as far away as Florida and Ohio and posted on Facebook in April, begging for help. Finally, she found four small cans at a formula depot in New York for $245.

She is trying to make those cans last three weeks instead of the normal two.

“It gets really scary,” she said.

In the small town of Richland, Georgia, where Sandra James, 36, lives, there is only one grocery store. In the past few months, she has not been able to find specialty baby formula for her 8-month-old son, Kenson, who breaks out in hives and loses his hair when he drinks dairy-based formulas.

At first, she checked five Walmarts nearby, driving around for hours after she got off work until she found the special formula she needed. She has sometimes gone to five or six stores a day as far away as Alabama before she can find a can.

In the meantime, she is giving her son more water and mashed-up vegetables to try to make his formula last longer.

Parents who have tried to buy online said they have encountered not only higher prices, but scams. Two weeks ago, K-Rae Knowles 30, of Oregon, Illinois, sent money to a stranger in exchange for cans of a specialty formula she needed for her 4-month-old son, Callan. The cans never came, she said, and the seller’s Facebook profile was deleted a few days later.

“People are being extra careful now,” she said. “It’s really heartbreaking that people are preying on this kind of shortage.”

In San Antonio, Marquez said she never thought she would be relying on baby formula to keep her daughter healthy at such an advanced age. But then her daughter received her diagnosis, and she was told that the special formula was the only thing that would keep her out of a hospital.

Since early April, she has been supplementing her nutrition with fruit, vegetables, ground turkey and other plant-based proteins.

“There’s very little else she can have,” she said. “It’s not like I can give her a Happy Meal. Or a peanut butter and jelly sandwich.”

Even when it is available, the formula is expensive. After her health insurance pays 80% of the cost, the family still must shell out $375 a month — when the food is available. With only her husband working as a grocery store manager, money is tight, she said.

She plans to get by this week with samples of other products that suppliers do have in stock and test which ones her daughter can tolerate for the time being.

“I have no other choice,” she said. “I need it. I want her to stay healthy and to stay out of the hospital.”

Thu May 12 , 2022
In his compact, immaculate apartment in Kuala Lumpur, Raziman Sarbini, 30, is bent over a pile of colourful kuih. He smears jam between the intricate crevices and cracks and presses the layers together. “Yes, this looks good,” he says contentedly, a smile of satisfaction weaving its way across his face. […] 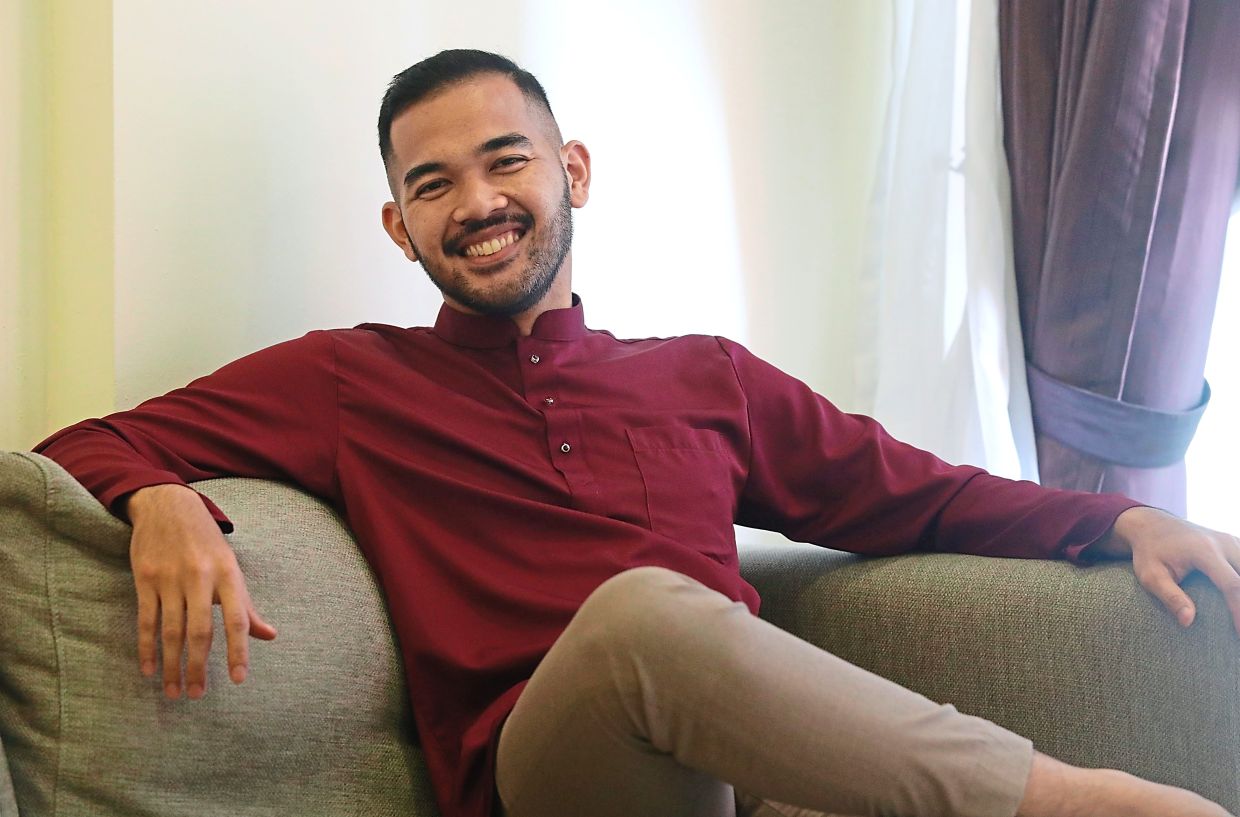