Now, even restaurant owners in the greater Attleboro area are doing it.

While most nearby eateries aren’t going fully plant-based, more and more are offering entirely separate vegan menus or, at the very least, including designated vegan sections or more meat-free items on their menus.

“I started offering plant-based options in my restaurant about eight years ago, and once customers started telling their family and friends that I had vegan items on my menu — and a separate vegan grill — the numbers just grew,” said Diana Martinez, owner of The Purple Rooster Café that recently moved from Plainville to North Attleboro. “I’ve had a fully separate vegan menu for five years and get people from all over — not just from this area — coming because of it.”

In addition to a variety of breakfast items, including a tofu scramble as an alternative to scrambled eggs and every kind of pancake and waffle imaginable, Martinez makes plant-based bacon, sausage, vegan pot pies, tacos, soups (corn chowder is a customer favorite) and desserts ranging from whoopie pies to avocado brownies. “My staff loves the vegan desserts better than the non-vegan desserts,” she said.

Her restaurant has attracted the likes of New England Patriots players — several of whom eat plant-based diets and are regulars.

There’s even a breakfast wrap called “The #91” (named for the uniform number of Patriots defensive end Deatrich Wise Jr.) that is stuffed with home fries, black beans, spinach, peppers, onions and mushrooms, and comes with black bean salsa on the side.

Citizen Crust, at Patriot Place in Foxboro, is another restaurant that has many meat- and dairy-free items on its menu and is frequented by Patriots’ players.

Greg Galano, executive chef at Citizen Crust, said that the restaurant’s plant-based offerings are “very popular” — especially the vegan meatball sub made with seitan (which is made from gluten, the main protein in wheat). “It’s pretty close to the taste of [meat-based] meatballs,” Galano said. “My employees eat the vegan meatballs more than anything else. They are so flavorful and so good … you can’t not like them.”

He added that the shaved coconut oil-based shredded mozzarella also tastes similar to dairy-based mozzarella cheese. “You can’t tell the difference,” he said. “You really can’t.”

“I talk with a lot of other chefs, and there are trends I see in our discussions about food. It used to be that we started with all meat and vegan items would be an afterthought,” he said. “Now, that’s just not the case. That’s not how the conversation starts anymore. Vegan and vegetarian items are an equal part of the conversation from the beginning.”

When The Economist released its annual “The World in 2019” issue predicting popular themes/trends, it called 2019 “the year of the vegan” and said that a full 25% (and growing) of 25- to 34-year-olds in the United States identify as vegan or vegetarian. For entrepreneurs, pursuing a career in the plant-based realm is the way to go, the story’s author maintained.

“Restaurant owners know that they will miss out on business if a dining party with even one vegan member rules them out because they have nothing to offer the rapidly growing number of plant-based diners,” said Evelyn Kimber, president of the Boston Vegetarian Society. “And increasingly, non-vegetarians like to try plant-based dishes when dining out to explore a new way of eating. With heightened concern for the environment and climate crisis, people are wanting to choose foods that avoid the damages — and animal suffering — caused by industrialized meat, fish, dairy and egg production. There are also significant health implications.”

The World Health Organization has classified processed meats (including bacon, ham, salami and hot dogs) as a “Group 1” carcinogen (something that is known to cause cancer) — the same category as tobacco and asbestos. Red meat, including beef, lamb and pork is classified as a “Group 2A” carcinogen, which means it likely causes cancer — and medical studies have found that the consumption of red meat contributes to heart disease, the leading killer of men and women in the U.S.

“Early on, I went vegan for health reasons,” said Attleboro resident Bill Salemi, 52, who has been vegan for nine years. “But I’ve always been an animal lover, and the more I researched it, the more I learned about the cruelty to animals (in the meat and dairy industries), and that became very important to me.”

Salemi, director of account management at a health care technology company and married father of two, said his go-to restaurant is Garden Patch at AJ’s Stone Oven Pizzeria in Norton.

“Not only is the food delicious, but the owner is vegan and he puts time and effort into making fresh, flavorful food that is prepped the right way,” said Salemi, referring to the fact that the restaurant has separate work stations, grills and deep fryers for animal/animal by-product dishes and plant-based offerings. “The brick-oven pizzas are the best around, and the Beyond Meat steak and cheese sub is incredible.”

Garden Patch at AJ’s owner Craig Somers said that customer demand for non-meat items is rapidly growing. He attributed the growth, in large part, to food pictures and positive reviews customers have posted on social media — including vegan Facebook groups.

“We get people from all over New England and it’s great. I’ve made lots of friends, and I am on a first-name basis with many of the regulars,” said Somers, who is planning, in the near future, to open a second restaurant near Boston that will be fully vegan.

The restaurant owner said he believes one of the major keys to the success of Garden Patch (the vegan portion of the restaurant) is that he serves tasty, plant-based takes on comfort food, including macaroni and cheese, and Italian favorites like pasta with meatballs and chicken parmesan. He said that more than 25% of his overall sales are from Garden Patch.

“Vegans like comfort food, too. There’s a perception that we eat like rabbits and just like raw vegetables, but that isn’t the case,” said the father of five, whose son Travis runs the restaurant with him. “And lots of people say they come for the desserts. We have vegan ice cream and 30 different cakes — all vegan. And a third of them are gluten-free, too. People always say, ‘Oh my God, this is delicious. I can’t believe it’s vegan.’”

Wrentham resident Corinne Perchard, 42, another fan of Garden Patch at AJ’s, said she is happy that more restaurants are accommodating diners who eat a meat- and dairy-free diet, because having limited options — like a salad and a plain baked potato — “gets really old.”

“It shows the demand is there,” said the vegan mother of two who works as a loan partner for a mortgage company. “With all of the information on the news and on social media about the health and environmental benefits of not eating meat, it’s on more and more people’s radars. And when they learn about how animals are mistreated, they can’t help but make the connection.”

Before she switched to a meat-free diet, Perchard said she would get major afternoon fatigue. “I would hit that 2-2:30 stretch and I’d be ready for bed,” she said. “But soon after I went vegan, it was like night and day. I didn’t have that afternoon slump anymore … and I used to have a hard time getting up to go to work. Now, I just jump right up. I don’t even need to set my alarm anymore.”

She suggested that those considering a plant-based diet “take baby steps” by incorporating meat alternatives gradually. “Try meat-free Mondays, or eat an Impossible Burger instead of a beef burger. You might like it better. You’ll be amazed how much better your body feels by cutting out meat.”

Galano said that he sees the escalated demand for plant-based foods increasing over time.

“I see it here, in our restaurants, and I hear it from other chefs,” he said. “There’s no question that the future will see exponential growth in vegan food.”

Wed Sep 8 , 2021
Recently, Nestlé’s Freshly, a prepared meal service, boosted its chef-prepared meal kits by introducing its first-ever plant-based meals product line. To understand why the Swiss food giant made this move – and indeed, to understand why one year ago it acquired Freshly – we need to zoom in on the two […] 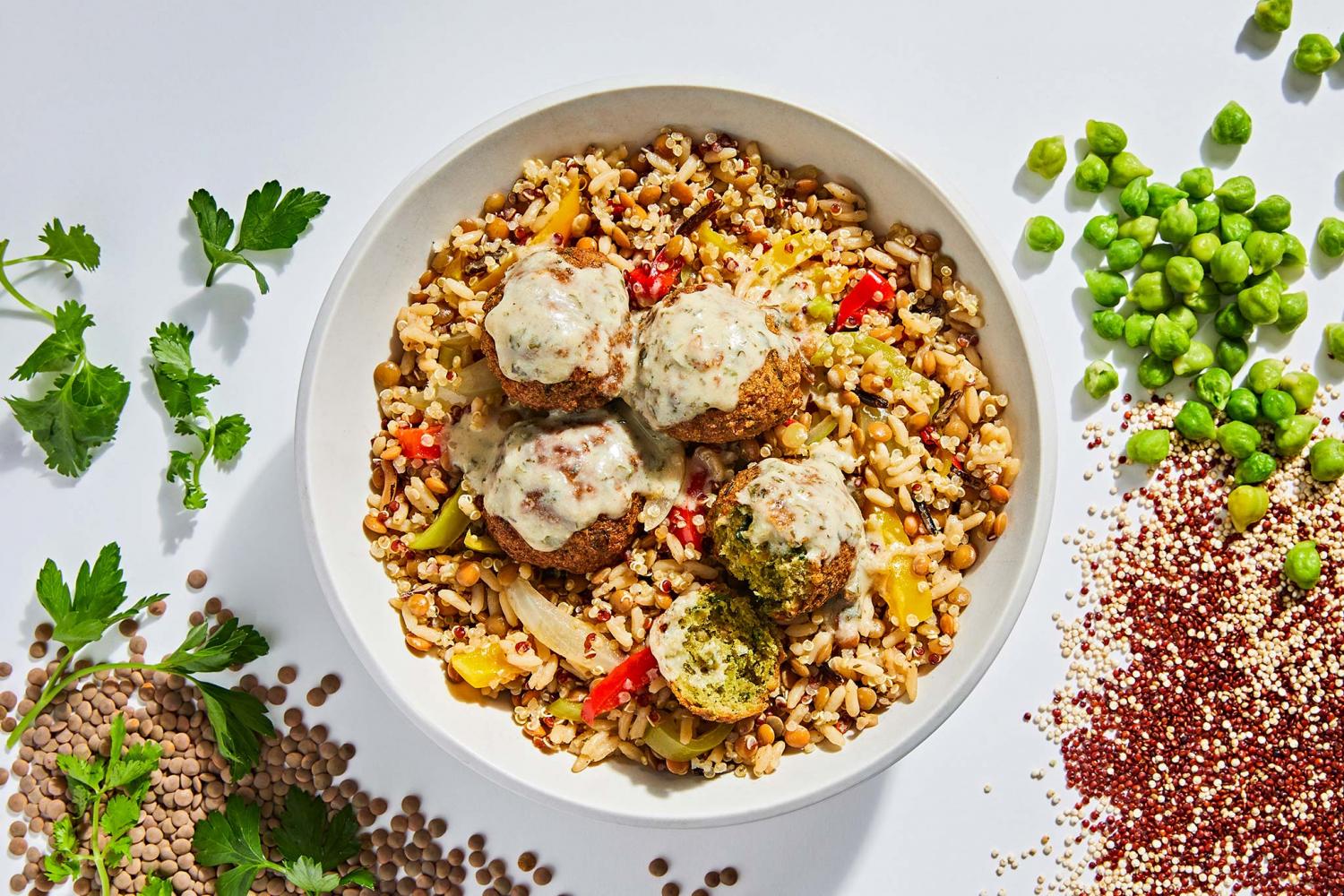