The Best Vegan Recipes for Breakfast, Lunch, and Dinner

Americans have a SAD diet

Our diets are sad—at least according to nutritionists. “The standard American diet, or SAD, is void of fiber-rich whole foods such as fruits, vegetables, whole grains, nuts, seeds, and legumes,” says Wesley McWhorter, RDN, a spokesperson for the Academy of Nutrition and Dietetics.

Why is that such a big deal? These plant foods can do amazing things for your body, he says, potentially protecting against unhealthy weight gain and chronic diseases like heart disease and diabetes.

Of course, you could go vegetarian or vegan to get your plant food fix. But what if you’re not ready to say goodbye to meat for good? According to the flexitarian diet, you don’t have to.

What is a flexitarian diet?

“Flexitarian is the combination of two words: Flexible and vegetarian, making it a more flexible style of being a vegetarian,” says Dawn Jackson Blatner, RDN, registered dietitian nutritionist and author of The Flexitarian Diet: The Mostly Vegetarian Way to Lose Weight, Be Healthier, Prevent Disease, and Add Years to Your Life. “It’s pro-plants, not anti-meat, so it’s great for someone who wants to be more vegetarian but doesn’t want to be super strict about it.”

Although the concept of a semi-vegetarian diet has been around since the 1980s, flexitarianism didn’t really make its move until Blatner wrote The Flexitarian Diet in 2010. More than a decade later, being a flexitarian is trendier than ever, according to the food industry research group FMI. It’s so highly regarded that U.S. News & World Report ranks it the No. 2 diet of 2021 for health and weight loss.

What’s behind the rave reviews? In addition to its promise of plant-based health benefits without having to give up the occasional steak, people love its positive vibe. After all, how many diets tell you what you can have, instead of what you can’t? And because it doesn’t require huge changes, it’s easy to stick with.

How healthy is the flexitarian diet, really?

A century of research confirms that plant-based eating can do great things for your health. Yet only a handful of studies have actually zeroed in on flexitarianism. The most comprehensive is a 2017 Frontiers in Nutrition meta-analysis of 25 studies that found that a flexitarian plan helped reduce body weight, blood pressure, and the risk of type 2 diabetes. It may also help treat Crohn’s disease, but more research is needed.

A 2020 study of 10,797 people published in the British Journal of Nutrition adds to the list of benefits, linking any diet that reduces meat consumption—be it vegetarian, pescatarian, or flexitarian—to lower BMI (body mass index), cholesterol, and blood pressure.

(Learn about even more benefits of plant protein.)

A flexitarian diet is planet-friendly

“It’s well established that modern meat production is a major driver of climate change, deforestation, and biodiversity losses,” says Chris Vogliano, RDN, a registered dietitian nutritionist and co-founder of Food + Planet. “A flexitarian diet may help decrease environmental pressures by reducing animal foods and replacing them with foods that are less harmful to the environment, like fruits, vegetables, grains, and legumes.”

How much meat can you eat?

One of the nice things about the flexitarian diet is that it lets you choose the amount of meat to eat. Whether you’re just getting your toes wet or are ready to dive in head-first, simply pick the category that works best for you:

What you’ll eat in a flexitarian diet

Aim for a plate that’s half fruits and vegetables, a quarter whole grains, and a quarter healthy, lean protein from foods like these:

What you’ll avoid in a flexitarian diet

In addition to eating less animal protein, you’ll also reduce highly processed foods (even those made from plants), such as these:

(Is vegetarian fast food healthy? Here’s what you need to know.)

How to start a flexitarian diet

“Downsize your meat and grain portions while pumping up the amount of produce you eat,” suggests Blatner. Then aim to replace some of the meat in your favorite recipes with plant protein. (Tip: Swap a quarter-cup of beans for each ounce of meat.) Blatner also recommends test-driving a new vegetarian recipe each week.

“Ask friends for their favorites or look through vegetarian magazines and cookbooks for one that catches your eye,” she says. “After a year, you’ll have tried 50 plus new recipes!”

Smoothie (try one of these smoothie recipes.)

Make sure to get enough iron

“This diet can be a healthy shift, as long as it’s balanced,” says Vogliano. But is it automatically better for you? Not necessarily.

If a meat-containing diet is made up of lots of whole grains, legumes, fruits, vegetables, and moderate amounts of animal foods, it’s probably going to be a lot healthier than a flexitarian diet filled with grilled cheese sandwiches or Impossible Burgers, he says.

Also good to know: Getting enough iron can be an issue when you eat less meat, so be sure to load up on plenty of iron-rich plant foods.

Overall, nutritionists are big fans of the flexitarian diet. And not just because it encourages more plants and less animal fat and protein. They also love the way it steers you toward whole foods and away from those that are highly processed.

In the end, says McWhorter, “a way of eating, like the flexitarian diet, that is not overly restrictive but focuses on increasing consumption of whole plant foods might help people make better choices.”

Next, here’s how to start a plant-based diet.

Dedication is all it takes

The post Everything to Know About the Flexitarian Diet appeared first on The Healthy.

Fri Feb 26 , 2021
Getting protein from plant-based sources like beans and nuts instead of animal proteins like red meat and dairy is linked to fewer deaths related to dementia and heart disease, according to a new study. The study, published Wednesday in the Journal of the American Heart Association (JAHA), studied more than […] 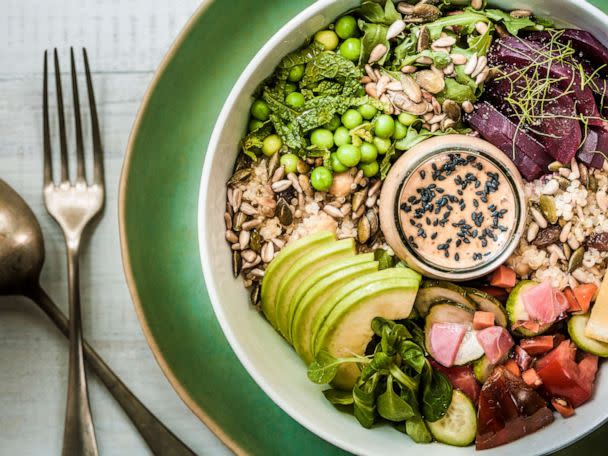